Venaseal Compared to Radiofrequency Ablation and Endovenous Laser Ablation. Pros and Cons of Each

Venous insufficiency, venous disease or venous reflux is a common disease. Its major symptoms are varicose veins and spider veins. Symptoms of varicose veins in legs are usually visible. They consist of large, bulging veins located just beneath the surface of your skin. Varicose veins are so detectable that the only way to hide them is to wear long pants, dresses or skirts. They mostly affect your thighs and back of calves, and can be so embarrassing and painful. Their presence is an indication that you have an existing venous reflux disease. So it is important to educate yourself more about this disease and seek help at a vein clinic if you have the symptoms. There are three renowned methods of treating chronic venous reflux that has caused varicose veins, spider veins, venous ulcers and swelling on ankles and so on. These are:

Each of the three treatment options is different and has pros and cons. To help you understand what they are all about, we will discuss each method next, and then compare VenaSeal to each of the remaining two options.

VenaSeal™ Closure SystemThis is a popular varicose veins treatment system. It is used to remove varicose veins that are near the skin surface. It leads because it is non-thermal, non-sclerosant and non-tumescent. In other words, the system makes use of a proprietary, clinically proven adhesive to seal the problematic vein. Thus, it is better than thermal-based techniques that put the tiny saphenous vein in danger of thermal damage during treatment. As an FDA-certified closure system, VenaSeal is safe and good at its work. There is no need of using tumescent anesthesia when treating with VenaSeal and so there is no discomfort. How it works also called superglue for veins, the VenaSeal closure system delivers an adhesive into the diseased vein via a catheter. Local anesthesia is often administered prior to accessing the affected vein through a tiny incision on your skin surface. As soon as the vein is accessed, a VenaSeal Catheter is positioned with the aid of ultrasound. Via the catheter, the VenaSeal adhesive is deposited to the affected vein. This causes the vein seal completely. Blood is then re-directed to healthier veins.  Then, the treatment site is protected with a bandage to keep it from an infection, and you will be free to go back to work. As a minimally invasive procedure, VenaSeal causes just minimal pain. So, we would advise you to go to a vein institute medical facility today and have ultrasound and other tests run on you. This will help your doctor diagnose your problem and design your precise treatment plan. If they pick VenaSeal™, it will be done as described above. 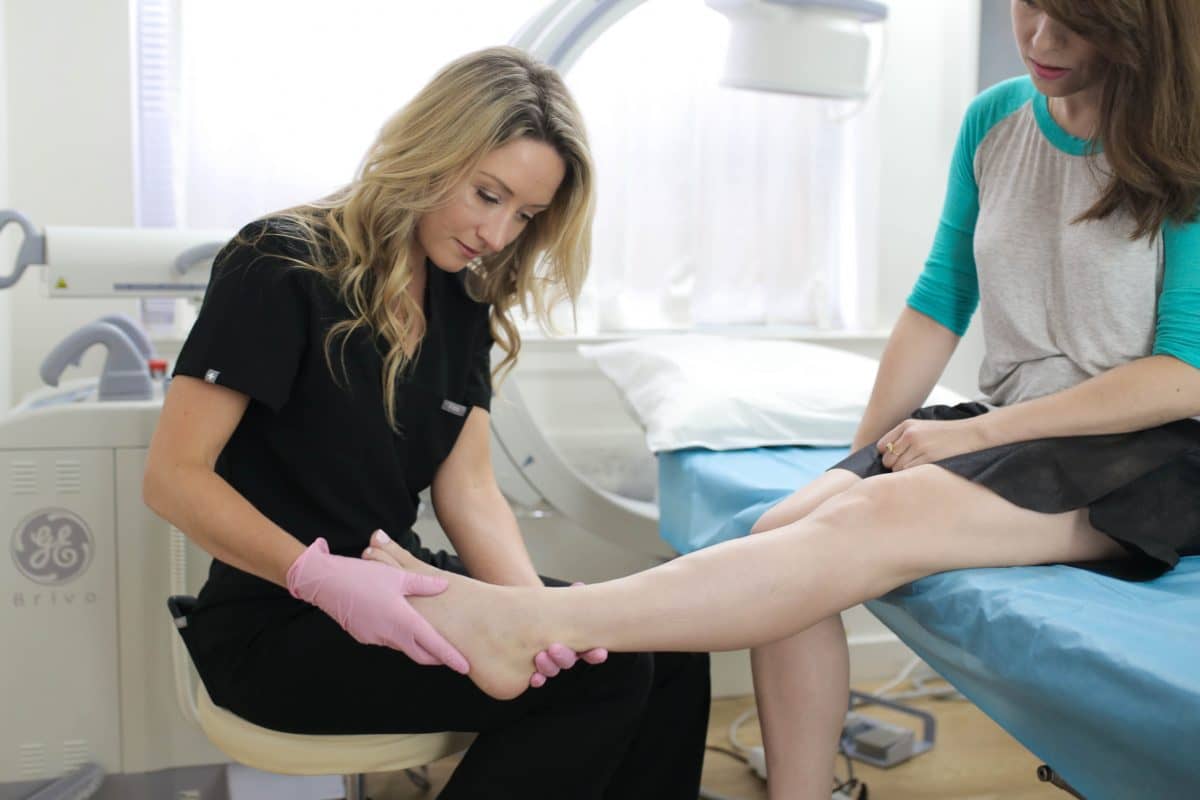 RadioFrequency Ablation (RFA or VNUS Closure) is yet another recognized method of getting rid of varicose veins and pain. It is used to re-route blood circulation via healthier veins to the heart. RFA leads to the closure of the diseased veins and the process of re-routing blood is often done via radiofrequency energy. It is quick and painless.

How RFA is done

Radiofrequency Ablation process entails numbing of the insertion area with local anesthesia.  If patients are being treated in a surgery centre, monitored anesthesia care is often chosen. Then an image-guided ultrasound is used to position the closure catheter into the affected vein via a small cut in the skin.  Prior to carrying RF or radiofrequency energy via the catheter, your vein will be seriously numbed. The energy releases heat that will cause the vein walls to attach, grow together and make a scar tissue.

This tissue will then be reabsorbed by your body. As soon as the broken veins in legs are closed, blood flow will be re-routed to healthy vein networks.  A bandage will then be put on top of the insertion site to prevent an infection and extra compression is then applied. Following this procedure, your best vein doctor nyc might ask you to walk numerous times to avoid prolonged standing or sitting. As well, doing strenuous activities can be discouraged to boost the healing process.

This treatment procedure is often done in the doctor’s office or clinic.  It is used to destroy any vein that is not healthy and one that can affect your circulatory health in a negative way. The removal of such a vein does not cause any adverse effect on your body. Endovenous laser ablation is one of the least invasive methods of damaging veins.

The first step is usually done with a topical anesthetic rather than a needle to make your skin numb. Next, an 810nm diode laser fiber is inserted into the damaged vein. Only verified faulty veins are treated with the laser and are identified with the ultrasound. After the insertion, the laser is heated gradually to ensure that the laser energy destroys the vein walls. This causes the walls to shrink and close completely. EVLT takes anywhere between half-an-hour and a full hour based on how large the area to be treated is. As soon as the procedure is completed, your vein specialist NYC will remove the probe and apply a small wound dressing that will keep the area free from germs. A compression bandage may also be applied for a whole week. This technique is used to treat big varicose veins.

Alternatives to VenaSeal, EVLA and RFA

If you don’t want to undergo any of the three treatment methods described above, what other options do you have? First, you can undergo leg vein surgery which is the method used in the past. This is the conventional way of eliminating varicose veins. It is more painful compared to any of the above-mentioned therapies and requires a longer recovery period. Unlike RFA, EVLA and VenaSeal™ that require only local anesthesia, surgery is done under general anesthesia. It leaves behind a scar and a couple of incisions. Unless your doctor asks you to do surgery, it is really not a good option considering that modern technology has enabled doctors to discover minimally invasive and easier treatment methods.

Another method is sclerotherapy and it is only great if you have smaller veins. A disadvantage with this one is that sclerotherapy for saphenous vein needs several treatments and varicose veins keep on coming back. It is not ideal for people who have injections. Finally, you can choose ambulatory phlebectomy. But, your specialist is the only person who can recommend or discourage any of the options.

Cost of EVLA, RFA and VenaSeal™

The cheapest of the three are RFA and EVLA. The reason for this is that the two methods are covered by medical insurance and Medicare. As long as you are able to prove to your insurer that treatment of your venous reflux is medically needed, your cost will be paid. They might ask for evidence, and in this case pain relief medicines that you have taken for the last six months and/or compression stockings you have been wearing might be enough proof. If you want to learn more, call one of the top rated vein doctors NYC has and ask about the costs. Some doctors offer all the three services and can teach you more about each of them. Don’t be afraid to ask any question you might have prior to accepting to endure a given treatment procedure.

Why VenaSeal™ may be the best pick

Surgery, RFA and EVLA and other varicose vein removal methods have been around for sometime. VenaSeal™ is a new yet one of the most ultramodern methods of removing a diseased superficial vein. It does not use heat or needles; so, pain is very minimal and recovery is almost instant. As soon as your damaged vein is closed, you can run errands and do other things in your timetable. Being an outpatient procedure, you can expect VenaSeal™ procedure to be completed in no time at all.

There is hardly any bruising because the process does not involve intense heat, and it doesn’t require a lot of local anesthesia shots to numb the area being incised. The small amount of adhesive used to seal your vein is absorbed by your body. As there are no injections or heat, VenaSeal is perhaps the most comfortable means of treating your varicose veins. If your doctor approves this method after diagnosing your condition, don’t hesitate to endure it.

Venous reflux is a horrible disease that could disable your legs once in a while. If left untreated, it could lead to varicose veins, swelling around ankles, spider veins, venous ulcers and skin discoloration. It is important to know what causes spider veins and how they can be an early sign that you would soon have varicose veins.

Scheduling a consultation with one of our vein treatment experts is one of the best ways to determine the proper resolution for your varicose veins. The treatments can include sclerotherapy, laser or radiofrequency ablation, a medication called Varithena, or procedures such as Venaseal, or Clarivein. 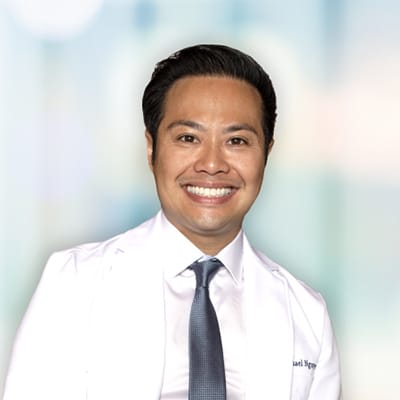 Dr. Michael Nguyen is a world renowned and Harvard trained vein specialist in Manhattan. He leads the team of vein doctors offering the highest level of care at the Spider and Varicose Vein Treatment Center in New York & New Jersey.

We know health insurance is confusing so we will help you check if you’re covered:

By emailing or contacting us, you are accepting the inherent privacy limitations of online communication. For more information, please read our Digital Communications document. Please respond "STOP" to any text messages to opt out.